It’s been a little while since I last updated you on my wife’s adventures in entrepreneurship.  A long while, in fact.  I think the last update was when they were looking for Business Insurance.  That was almost a year ago, now.  So much has happened in that time!  How will I fit it all in!

I think I’ll hit the highlights.  And, cover the most important change.  One you’ll likely be able to guess if your familiar with the series, and you’ve read the title of this post. When my wife first started this business, it was with two other partners.  Each of them brought their own specialties to the table, and made the business the success that it is.  As the title implies, one of them recently left the company.  This partner is technically still a owner as he hasn’t sold his shares in the company, but has stepped down from any active participation in the running of the company as an employee.  Basically, he’s become a silent partner.

Without letting too many of the details slip, let’s just say that over the last year or so, he had grown unhappy with his role at the company and felt that leaving an active role in the company would solve those problems.  Whether it will or not is up for debate.  In any case, there was lots of discussion over how this was going to take place.  Much of that discussion revolved around how the control of the company would evolve and change once he was gone.  My wife and the other partner had some very valid concerns about the structure of the company, it’s board of directors, and it’s shareholders.  In particular, there was some confusion on what rights the shareholders held.

As a part of any corporation, the shareholders are technically part owners in the company.  It gets a lot more muddled when you’re a shareholder in a large corporation like Microsoft, or Apple, but in a small company where there are only three shareholders, it’s a bit easier to see.  If there are X number of total shares issued, and Y is the number of shares a shareholder owns, then their ownership of the company is Y/X.  In a situation like Apple, someone who owns 1 share owns 1/924,755,000th of the company.  In the case of my wife’s company, each of the owners owns 100/300th of the company, or 1/3rd.  Much like a larger corporation, my wife’s company is required to have an annual shareholders meeting where the board of directors are elected and other similar things are voted on.  Generally, it will just be the election of the board.  So, the more direct answer is that the third, now silent, partner has a 1/3rd say in who is elected to the board of directors.  Should he disagree with the selections, he could vote against it, but wouldn’t be able to overcome the 2/3rd majority that the other two partners have.  So, based on that, he really has no realistic say in how the company is run.

Another bit of contention is that fact that if the company were to pay a dividend to the shareholders, as they did this last year, that he would get 1/3rd of that dividend without having done any of the work that the other two partners had done.  Unfortunately, that’s just the way it is.  He still owns 1/3rd the outstanding shares, so he’s entitled to 1/3rd the dividend.  There are several ways around this.  The most obvious of which would be if he were to sell his shares to the remaining partners and completely exit from any involvement with the company.  The other method would be to take the 2700 shares that the company is able to issue and give them to the remaining two partners as an annual bonus of some sort and in effect, dilute the third partners shares.  Everyone involved feels this is a somewhat backhanded way to deal with it and it will likely not happen.  Short of that, it would also be possible to increase the remaining partners salaries such that the issuing of a dividend would not be reasonable.  This also isn’t a great solution as both the partners and the company would pay the higher payroll tax rate on the money rather than the dividend rate.  In the end, it’s probably best that they just leave it as is, and merely acknowledge that the third partner put in a years worth of work and helped build the company so is entitled to that bit of ownership that he has.

I think there are a couple of very important lessons here.  The first is that starting a business is no small thing.  The people that you choose to partner with may not always be of the same mindset, and they may decide that the partnership isn’t working.  You’ve got to be able to live with the consequences of joining into the partnership, especially if the partnership fails for any of the partners.  The second lesson is that you’ve got to keep a level head when dealing with situations like this.  It would have been easy for any of the three partners to overreact and cause it to be a much more difficult situation that it was.  Playing nice isn’t just for the playground, folks.

Are there any other specifics that I haven’t covered in this or other posts in the series that you would like to hear about? I’ll share what I can.

As I’ve covered before, shortly after my wife quit her job, she joined a couple of her previous coworkers in starting a business of their own.  As anyone who has started a business of their own knows, there are many, many unexpected things that can come up.  With proper planning, many of those things can become less of a shock when they happen.  One way to do that, and one that the accountant that was helping my wife and her partners get started required, is business insurance.

What is business insurance? 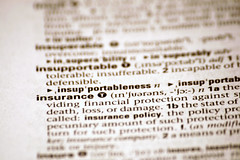 It can come in many small variations, but in general terms, it is insurance that helps protect you and your company against liability and litigation.  It also can act as insurance against interruptions in business.  If your store floods, and you have to close for a few days, it will help defray those costs.  Your coffee burns someones tongue off?  It’ll help with that as well.

With the particular type of business that my wife and her partners were building, liability insurance was the most important part of their business insurance package.  They work daily with clients in a variety of locations and scenarios and as such, need an insurance that will cover them for liability if someone were to get injured while at one of the locations or in transport to the location.  That part of the insurance was much more important than having insurance for a office location (at least right away since they didn’t have an office for several months.).

Where do I get business insurance?

Getting business insurance isn’t as difficult as it may seem.  In fact, it might be as easy as getting a referral, like my wife and her partners did.  A quick look through your local phone book will likely get you some prospects as well.  And in many cases, if the agent you talk to doesn’t offer business insurance, they’ll happily refer you to someone who does.  Much like any other type of insurance, there are plenty of websites that offer quotes and services.  And, much like any other type of insurance website, it’s difficult to weed out the ones that are really there to help and which are there to make themselves a quick buck.

Much like anything else involving your business, business insurance really needs to fit your business.  Your responsibility as the business owner is to check and double check to make sure that the coverage fits your business and will cover all the necessary situations.  Getting a sub-standard insurance just because it was the cheapest could cost you money, or worse, your business.

Last update, I told you that the COBRA health insurance plan premium went through the roof and we were deciding whether to continue paying for it, or to switch over to the plan that I get at work.  In the end, we decided to remain on the COBRA plan.  The difference was about $350 a month, but we figured that if we had only one or two medical mishaps, it would easily pay for itself with the 100% coverage.  And, as luck would have it, it turned out to be a good idea.  Both my wife and I ended up having issues that required several weeks of physical therapy.  Hers stems from an accident she had a few years back that seems to have thrown a few things off.  Nothing some pt and a pair of orthotics won’t fix.  Mine is from my football days.  Arguably, not completely necessary, but was something that would need to be fixed one way or the other, so decided to get it taken care of.  Then, to make our decision look even smarter, my wife fell in the ice and snow yesterday and severely sprained her ankle and knee and prompted a visit to the ER.  We got a nice new pair of crutches and what will likely be a very expensive pair of athletic wraps.  Of course, all paid for by our insurance.  The extra money has easily paid for itself.  But, that all ends on the 1st, so we’re switching back to the coverage that I get at work.

The business that my wife and her friends started continues to do well.  They received a very important certification from the state that will allow them to pick up another line of business and expand even further.  My wife continues to be the only one getting a regular paycheck from the company, but with this new certification, that will likely change very soon.  Luckily, the people that she’s working with are both very qualified for the business that they are in and have plenty of experience (my wife does to) so they don’t have much in the way of learning curves for the actual service that they provide.  Their biggest learning curve has been the actual running of the business.  They were smart and got a lawyer and an accountant right away though, so they’ve had excellent guidance along the way.

Also, I did receive a small raise this year which should help.  However, between the insurance and some increases in medical flex and childcare flex, my checks will likely be smaller than they were in 2009.  Most of that should come back through the flex accounts.  Tax free money for the win.  Especially on things like childcare that you’re going to spend money on anyways!