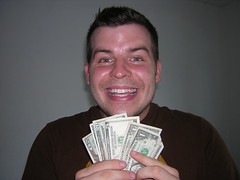 Consider this image the inspiration for this post.  It’s one of many daily photos and videos that the folks over at failblog.org post to their site.  If your curious, the fail here is that she’s sitting on a chair over the treadmill.  And at the core, they are right.  Just sitting there, she won’t get any exercise.  If she moves her legs as if she were walking on the treadmill, she might get some, but still very little.  Not nearly as much as she would if she were standing and walking the treadmill.  Or, better yet, if she were running on the treadmill.

But, sometimes, we get too stuck on doing something 100% or not doing it at all.  Instead we should realize that we sometimes have to start at 50% and work our way up.

Don’t get me wrong.  I’m all for giving something your all.  But, if giving something all your resources does more harm than good, you’ve got to know how to scale.  Take this lady in the picture.  She looks a bit on the overweight side.  Likely has problems with her knees.  Likely, she can’t walk long enough on the treadmill to do any good.  So, she sits on a chair and “walks” on the treadmill with just the lower legs.  Eventually, if she sticks to a diet and keeps doing exercise, she might lose enough weight to alleviate the pain in her knees and she can begin to walk on the treadmill.  But, if she were to try and do only that now, she might damage her knees further, or frustrate herself so much with the pain that she quits trying and resigns herself to a scooter chair the rest of her life.

The same thing applies in personal finance.  Each and every one of us would love to pay off all of our debt.  Even better would be to pay it all off all at once.  But we don’t.  Why not?  Wouldn’t that be “giving 100%”?  Sure, but we all have bills.  And most of us like to eat something now and again.  Instead, we give 20% or 30%, or whatever we can afford after we’ve paid our bills and eaten.  We take that little bit and pay it towards our bills.  Eventually, as those bills shrink, we can pay more towards them.  And if we keep on that track, we will eventually pay off all of our debt.  Just like the woman, we find ourselves running on the “debt free treadmill“.

Want to invest?  You’ve gotten good returns on what you’ve already invested.  Why not just sign over your paycheck to your broker and build your portfolio?  The returns are better there than they are in the electric companies bank.  Again, we still have bills and necessities to buy.  We can’t give all 100% of our income to one purpose.  We have to budget, and learn how to be satisfied with giving what we can, even if it isn’t 100%.

Life isn’t a “110%” game.  It’s about striking a balance where the different parts of your life all flourish with what you’ve given them.  Don’t fall into the trap of thinking that you’re not doing it well, or that you’re failing just because you aren’t putting 100% towards it.  Sometimes, even a little movement is better than none.

Habit.  It’s a dirty little 5 letter word.  I read somewhere that it only takes 6 times of doing something before it becomes a habit.  Habit is a close relative to addiction, although somewhat easier to change.

If you’re like me, you’re a creature of habit.  You like doing things the way you’ve been doing them and don’t feel very compelled to change them.  That’s the way I was before I began taking control of my finances.  I was a habitual spender of my paycheck.  There was no saving involved.  When I started this personal finance journey, I had to break that habit and begin a new one.  One that involved paying off my debt and saving money.  Like any other habit, it took time to really make it into a habit.

That last one, the habit of keeping the budget, is the one I’d like to focus on here.  In the beginning (anyone else hear that choir?), I used only a copy of Microsoft Money (now defunct).  As I matured in my budgeting, I adapted a spreadsheet based on the budget spreadsheet that Dave Ramsey created for his Financial Peace University.  And that’s where it’s been since.  I have spreadsheets going back several years, in fact. 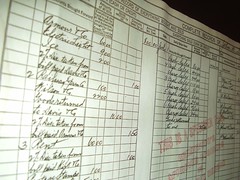 Recently, my computer became ill.  I ended up having to back all of my data off the hard drive and rebuild it.  Not a lot of fun, but it’s sometimes nice to start with a fresh drive and get rid of some of the flotsam that it’s accumulated.  Long story short, it took over a month to get it all sorted out and rebuilt.  When I had gotten everything installed and ready, it had been nearly 6 weeks since I had last checked in on my budget.  The process, if you’ll indulge me, is somewhat cumbersome.  First, I would manually enter in transactions from the internet banking application at my credit union.  With the version of Money that I had, I was never able to get it to properly import a file, so manual entry was my only option.  I would then manually enter in any outstanding checks and bill payment items.  Once the info was entered into Money, I would then manually, line by line, transfer the amounts from Money into the appropriate budget categories in my spreadsheet, using a calculator as I went to calculate the totals for each category.  (This was necessary because I didn’t have the individual line items in the spreadsheet, so I merely took the existing total and added whatever the line item was in Money to it.)

So, you can see, 6 weeks of undone budget work was quite a pile of work.  And like any good person with lazy tendencies, I put it off.  Before I knew it, there was almost 3 months worth of budget to do.  That was about the time that I decided that maybe my habit needed a bit of rethinking.  I began looking into new personal finance software that might integrate a little bit better.

What I decided on was You Need A Budget.  I’ll have a review of that coming up in the next week or so.

Telling all of you that was just getting us to this point.  The meat of the idea.  You’re doing it wrong!  Somewhere, something your doing is being done wrong.  Maybe not wrong in the sense that it’s incorrect (none of us make financial mistakes right?), but wrong in the sense that the processes that you are using are costing you;  Time or money, or both.

If there’s one thing I’ve learned through all of this, it is that you must be vigilant.  You’ve got to rethink your processes periodically.  It doesn’t have to be all that often; Some will go overboard and spend so much time rethinking their processes, that they’ll suffer from analysis paralysis.  Instead, set up a schedule where by you set aside an hour or two to go through your processes and try and discover new ways of performing those processes that might save you money or time.

In our case, moving to a newer software that made it easy to import our transactions and had the budget part of it all built in has resulted in saving us a lot of time.  What about you?  What processes do you perform that you’ve never changed?  Take a look at them and see if you can’t find a way to save yourself some time or money!