Tax season is right around the corner.  Before you know it, we’ll all be holed away in some corner of our house punching numbers into our computers as we try to squeeze a few more of our dollars back from the IRS.  That’s a task that might get a bit harder for some parents this year.

According to this CNN Money report, on January 1, 2013, several tax credits are set to expire.  And, unless Congress manages to pull it’s collective head out of a dark place and extend those credits, many of our tax returns will be quite a bit heavier come April.  For parents, specifically, this could cause quite the burden.

That’s just four of the parts of the tax code that are set to expire on January 1 if Congress doesn’t act on it.  In a Presidential election year, you can bet they won’t make any moves on it until after election day, so they’ll have a very short window in order to get something done.  I truly doubt that they’d let them all expire, but depending on the outcome of the election, it could be a pretty dirty fight.

How many of you have used these credits?  Would their loss on January 1, 2013 change your tax bill considerably? 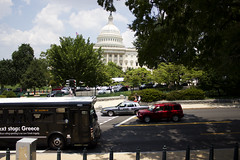