Another quarter has come and gone.  We’re bracing ourselves for the coming winter.  It’s also time for a check-up on my Lending Club account, and the returns I’ve gotten.  In my 2Q13 update , my account was showing a return of 14.08%.  Keep reading to find out if I’ve managed to maintain that rate.

One of the other things that I wrote about in last quarters update was that my portfolio finally suffered it’s first defaulted loan.  In this quarter, I had a few loans that went into the late categories, but ended up coming back to normal.  I’m still a little surprised that I haven’t had more defaults.  I’m glad that I’ve been lucky enough to only have the one default since January, 2010.

The closer you get to true passive income, the less work you have to put into it.  Lending Club portfolios are not true passive income.  I’ve discussed it before, and it bears reiteration.  They are awful close though.  In all, I spend about 20 minutes a month to reinvest the payments and interest that have come in.  It’s not all at once, usually.  With the $9-$10 in interest that my portfolio is earning each month, that’s a pretty good wage.  Maybe it’s an active passive income stream.  Oxymoron for the win!

Now, for what everyone has been waiting for.  (Or scrolled down really quickly for)  Without any further defaults, and staying on top of reinvesting the funds as they come in, I’ve been happy this quarter with my return.  As of 10/4/13, my current Lending Club returns rate displayed is 14.69%!  It’s bounced back nicely from the default.  I’ve been investing the funds a little more aggressively over this quarter which helps explain some of that.  At this point, my reasoning is that I’ve been investing with Lending Club since 2010 and have only had one default.  The risk is still there, I think, but I don’t think it’s quite as bad as some would like to make it sound.

Where will my rate be at the end of the year?  I’m hoping it will remain steady.  I’ll be maintaining the same Lending Club investing filter, and hope that doing so will maintain the low default rate I’ve been lucky enough to have.

How is your Lending Club portfolio doing?

Lending Club is a peer-to-peer lending service.  People (like you and me) sign up for their site, and list a loan to be funded by investors (like you and me).  I like to think of it as replacing the bank in a loan with me.  (Except I’m not “too big to fail”.)  Of course, with that comes the same risks that the bank assumes when it issues a loan.  There’s a risk of late payments, missed payments, and default and it’s associated collection activities.  Luckily, Lending Club and Prosper (another p2p lending site) take care of most of the paperwork for the lenders (and borrowers).  This post is the second quarter update on my Lending Club account, and the return I’m getting on my money.

I’ve been mentioning in the last several updates how lucky I’ve been that I haven’t had a loan go into default yet.  Well, that streak ended recently.  I knew it was only a matter of time before one of the notes defaulted, and one has.  Luckily, the loan that defaulted was a small one, and my portfolio has grown enough that the value of the default didn’t really affect the account too much.  The value of the defaulted loan is about 1% of my Lending Club portfolio.

There’s also a loan that is in the 31-120 days late category, that has the possibility of going to default, but at this point, the borrower is making attempts to pay the loan.  The reason it’s still in the late category at all is because the most recent payment was only a partial payment.  This loan is a larger loan than the defaulted one, so I may have to consider taking the loss on it and selling it at a discount to get it off my books.

One of the things that I like most about Lending Club, and p2p lending as a whole, is that you get a relatively high churn on your money.  It’s not a buy-and-hold scenario, per se.  Yes, you invest in a note with the expectation of holding that note until it is fully paid off, but, as the payments come in monthly, that money is available for reinvestment.  In my 1Q13 update, I mentioned that I’d been a bit lazy in my reinvestment of those funds.  I was slightly better with that in the second quarter, and was able to keep most of the money pretty actively invested.

[Tweet “I knew it was only a matter of time before one of the notes defaulted, and one has.”]

Many people (myself included) call p2p investing a form of passive income.  While not strictly meeting the criteria in that it does still require some activity on the investors part, it’s pretty close.  Maybe we need to start defining passive income in terms of it’s passivity?  Something like levels.  Each level is achieved by it’s decile of passivity.  For instance, I think p2p investing could be somewhere around 90-95% passive.  That would make it a Level 9 Passive Income source.  With about 15 minutes of work a month, I’ve earned almost $60 in interest payments as of the end of June of 2013.  Last year, with the same amount of work, I earned $75.37 in interest payments.  If I had significantly more money, that amount would be larger, but I think that the time spent each month to earn it would be a bit larger as well.  Still, a pretty close to passive means of making some money.

We’ve talked about most of the rest of the account, but the title did say that it was a return update, right?  Yes.  In my 1Q13 update, I mentioned that the rate of return then was being shown as 14.63%.  As of 8/3/13, it’s being displayed as 14.08%.  The combination of the defaulted loan, and the payoff of a couple of higher interest paying notes is bringing the rate down.  I’ve been happy with the return I’ve been getting, but I truly think that a more reasonable expectation of return is somewhere in the 10-13% range.  I’ll take the 14%+ returns I’ve been getting though.

Click here to learn more about how I select my Lending Club investments.

Overall, I’ve been really happy with my results at Lending Club.  And, with the p2p lending industry as a whole issuing over 200 Million in loans in July, it would appear that there are plenty of other happy users too.

Have you gotten your feet wet in p2p lending?  Why or why not?

This last weekend, I attended a young professionals conference.  As you can imagine, a large part of the conference was spent talking about leadership.  One of the speakers was legendary basketball coach Dale Brown.  One of the breakouts was entitled “Visionary Leadership”.  I’ve also just started reading the book “Entreleadership” by Dave Ramsey.  In all of those places, there are lots of buzzwords that describe leadership, and what a leader is. 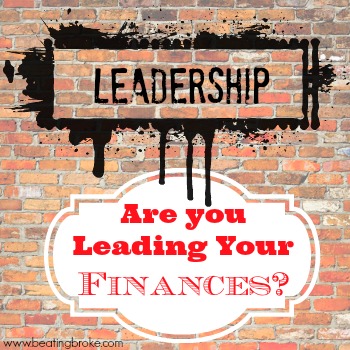 Personal finance aren’t all that much different from a business and a business’ finances.  We still have income coming in, expenses going out, and the profit left over.  Unfortunately, for many, that’s where the parallels end.  Let’s change that.  Let’s apply some of those leadership principles to our lives.  Specifically, let’s apply them to leading your finances.

Business leaders are always looking for ways to make their business and employees more efficient.  Over the years, businesses have foregone the paper and pen and replaced them with computers.  They’ve replaced old marketing tactics with websites and social media.  Leading your finances means finding, and embracing, new ways to make your finances more efficient.  Forego the old check and envelope method of paying your bills and sign up for bill-pay.  Or automate your bill paying by setting them up for auto-pay.  Find ways to save that also create income.  Look into better rates at better banks.  Learn about dividend investing.  Learn about peer-to-peer lending.

Many of today’s biggest and brightest businesses wouldn’t even exist today if their leaders hadn’t been continually opportunity seeking.  If all Apple still made was computers, it wouldn’t be the multi-billion dollar company that it is today.  If Steve Jobs hadn’t seen the opportunity in the iPhone, iPod, and iPad, they’d be just another company making computers.  Apply the same to your finances.  Peer-to-peer lending hasn’t always been what it is today.  There was a time where it was still a fledgling opportunity.  A small percentage, relatively, of the population saw the benefit of it as an investing avenue, and, for most, their finances are the better for it.  Be open to services and products that can help you make your finances better.

Businesses fail.  If they have good leaders, they only fail momentarily and spring back stronger than ever.  They’ll have set the company up to be diversified so that any one failure shouldn’t be enough to ruin the company.  Investors talk all the time about the importance of diversifying an investment portfolio.  But, it can be applied elsewhere in our finances.  Having all of your money in one online bank is great.  Until your internet goes down and you can’t get to it to bill pay.  Diversifying to have a set amount of cash available in an emergency can help you out there.  Not depending on just stock investments is another great way to diversify for failure.  Prepare your finances so that an opportunity that fails only sets you back, doesn’t bankrupt you.