My grandparents were married during the Great Depression.  Their first few years together were spent in severe economic hardship, and the financial lessons they learned during that lean time never left them.

They always had one car.

My grandma wore the same dresses throughout my entire lifetime.  I think when she died, the dresses she still had were 25 to 30 years old.

They rarely went out to eat, opting instead to cook and eat simple meals at home.

My grandparents did without much of the time, and they were very frugal with their money.

They sold their house when they retired and lived in a 5th wheel trailer parked on the side of our lot, less than 20 steps from our house.  All of their possessions fit in that space, and their home was not cluttered.

Has the Meaning of Frugality Changed? 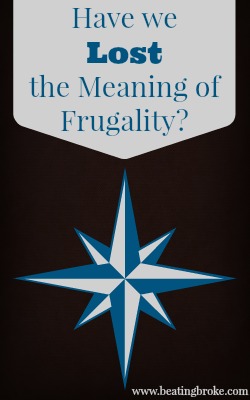 Now, the definition of frugal seems to be different.  People try hard to avoid doing without.

Whereas my grandparents carefully bought the groceries they needed, today’s frugal zealots clip coupons and create grocery storage spaces out of their garages.  They have rows and rows of processed food that they got for pennies on the dollar thanks to couponing.

Many mom bloggers are making their fortune sharing all the hottest deals available.  Kids’ winter jackets for $8!  Hurry, buy women’s turtlenecks for $4 today only!  Get your child the Barbie princess house for the low price of $48!

Do You Really Need That Bargain?

So many consumers are on the hunt for a good deal that they never stop to ask themselves if they really need the item that is on sale.

What if you never even thought about buying that item until you saw it on sale and didn’t want to miss out on the savings?

Look back at pictures of people’s homes from 60 or 70 years ago.  Their homes were not cluttered.  They were much more like the minimalists’ homes of today.

Now, we take advantage of so many “deals” that our homes are overflowing.  Here in Arizona where there are no basements, and therefore no built in storage, most people can’t park in their garages because they’re stuffed with possessions.

We don’t need all of this stuff.

Snagging a great deal on something we don’t need isn’t a deal.

It’s a waste of money.

Keep More Money in Your Pocket This Holiday Season

We’re entering into the busiest shopping season of the year.  There will be good deals, plenty of them.  You’ll likely be tempted to buy as many gifts for yourself as you will for others.  After all, the prices are so good.

But ask yourself one simple question–Do I need it?  If you don’t, it’s not a deal.

Do you think the definition of frugality has changed?  Do you or someone you know struggle with buying more than you need because something is on sale?

If one of your resolutions for the new year is to save money, you’ll want to check out Amanda Grossman’s new ebook, The Walgreens Drugstore Game:  Strategies to Turn Pocket Change Into Thousands of Dollars’ Worth of Free Stuff.

Grossman is a penny pincher who blogs at Frugal Confessions.  She and her husband knocked out student loan debt when they married and are now living debt free (except their mortgage).  She also quit her job and is now living the dream of working at home.  A look through her blog shows she knows how to save money and get the best deals.

Now, she wants to share those deals with others.

I’ll confess that a few years ago, I played the CVS drugstore game with a fair amount of success.  However, I never conquered the Walgreens drugstore game.  It was just too complicated for me.  In the years since I stopped playing the drugstore game at all, Walgreens has only gotten more complicated (or so it seemed to me) by adding in a new rewards incentive.

However, after reading Grossman’s book, even I feel like I could tackle Walgreens drugstore game.

If you’re paying full price for toiletries and personal care items, you’re simply paying too much.  Grossman will show you how to pay less than a few dollars to get $20 or more worth of merchandise.

A Primer For Those Who Don’t Use Coupons

If you’re not much of a couponer, don’t worry.  Grossman explains in detail the many different kinds of coupons that are available.  She also explains where to find them, including how to get a steep discount when buying the Sunday paper for the coupons and advertisements.

If you’re an experienced couponer, don’t worry.  Simply skip over this section.

Once you understand the basics about coupons, Grossman delves into how to find the best deals for the Walgreens drugstore game.  What I like most about this book is that Grossman doesn’t just explain how to score the deal, she also provides real life examples from her own shopping trips.

In fact, she makes the process seem so manageable, that even I registered for a Walgreens Balance Rewards Cards and signed up for discounted Sunday papers to be delivered to my house.  I’m tired of paying full price for toiletries, and even if I’m only half as successful as Grossman at the Walgreen’s game, I’ll be saving a lot of money.

If you already save a fair amount with coupons, don’t worry.  At the end of the book, Grossman includes advanced savings strategies.  Frankly, at my current coupon skill, these strategies went over my head, but for others who are used to couponing, they could be very helpful.

At only $4.99, Grossman’s book, The Walgreen’s Drugstore Game, should save you enough money that you’ll recoup the money you spent to buy the book on your first trip to Walgreens using her tips.  Everything you save after that in the weeks to come will be extra money in your pocket, which we all can appreciate.

Every day, I hear people say that they don’t use coupons because they don’t have the time to go through the papers and mailers and clip the coupons. “It just takes too much time” they say. Those same people, will spend hours budgeting and finding ways to save themselves money, but they don’t see couponing as a viable use of their time and efforts. While coupons may not be as important to your financial health as a budget, they can be just as good as many of the other saving methods that you will employ.

With the popularity of extreme couponing, it’s no wonder that people feel that they need to spend hours each week pouring over newspaper inserts, clipping coupons, then sorting them all into categories and then making plans for where they’ll shop and what they’ll buy. In their mind, they see piles and piles of inserts, and closets full of extra supplies that they’ll need years to use up.

Couponing doesn’t need to be extreme, though. If skipping your daily latte can be a good strategy for saving a few dollars a day, so can clipping a few coupons. Taking a few minutes each week to flip through the inserts in your paper and clipping the few coupons that you find for the things that you buy regularly can easily save you a few dollars a week. Signing up for manufacturer email newsletters can often result in an electronic coupon to print out once or twice a month. A few extra emails a month is a small price to pay to save a dollar or two.

Now, the thing to remember here is that you aren’t going to retire off of the money you’ll save. And, you certainly won’t be sending your kids to college with it either. But, saving money is saving money. A few dollars here, and a few dollars there all adds up in the grand scheme of things. Heck, maybe you clip coupons so that you can treat yourself once a week to that latte that you’re currently skipping.