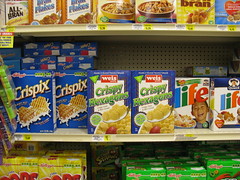 The words Frugal and Frugality have been some very popular words lately.  With the economy the way it is, it’s not very hard to see why. Even so, I still know people who claim to be frugal, but refuse to buy anything but the brand name products.

There is very little room for brand names in a frugal lifestyle.  The good news is that many of the non-brand name products are very similar products.  In some cases, they are the exact same product.  In other cases, they are not even close to the same thing.  In those cases, you have to weigh how much you want that exact product against your desire to save money and live frugally.  Is the extra $1 worth it?  Depending on the product, you might make an exception.

If you decide it is worth it, here are some things you can do to try and help cut that cost.

Sometimes the brand name is worth it.  But, I encourage you to try the generic stuff too.  You just might be surprised to find that it is a very sufficient replacement.

One of the side effects of my wife’s entrepreneurial adventures has been that we have a very unstable income on her side of the balance sheet.  And part of how we’ve dealt with that is to try and save money in as many ways as we can.  Frugality has become the modus operandi in our household.

Anyone with kids will tell you that there are certain things that you cannot go without.  For example, kids need clothes, and lots of them.  They’ll go through several outfits a day depending on the messiness of their meals and the level of dirt outside.  Kids like to have toys too!  And being frugal and buying your kids toys don’t always go together.

But, we found a site that helps us a little with both.  It’s called swapmamas.com and it is pretty darn cool.  In a nutshell, it is a social networking site for moms where they gather together and swap/barter for items.  Say we have  some formula left over after our youngest moves up to real food.  We can list the sealed cans on swapmamas.  Another mama comes along and uses that formula, and has some clothes that will fit one of our kids.  Or some DVD movies that her kids no longer watch.  She offers the trade to us, we accept and all that’s left is the shipping.  We pay for the shipping for  the formula, and the other mama pays for the shipping for whatever it is that she traded us for.  She gets a can of formula that she can use and that would have done absolutely nothing for us except sit on a shelf and we get a new movie or some new(ish) clothes.  Win Win.

Swapmamas.com is worth a look if you’ve got kids and want to try and be frugal as well.  It might even be worthwhile if you don’t have kids.  I can’t attest to that since I would have never known the site existed if it weren’t for having kids. 😉

Do you think that being a Frugaler is normal?  It obviously is a bit abnormal in the American society.  Although, with recent economic news, I think that it’s becoming more popular.  But normal?  I really don’t think so.

Every day, we Frugalers, task ourselves with finding new and exciting (well, maybe not exciting) ways to spend less money.  At the same time, we try and find ways to make more money.  We hope that the net effect is that we not only have money to pay the bills, but that we have some to save for a rainy day and, maybe, even retirement.  We daren’t say it, but some of us even think about “early” retirement.  And, if you peer no farther than our little realm of the blogosphere, you would think that the whole country does nothing but count pennies and do personal accounting.

I don’t think you would find too many PF bloggers who would argue against more people becoming Frugalers.  In fact, that is the purpose of a vast majority of the PF blogs that exist.  On any given day, you’ll find articles on “best way(s) to save on groceries”, “way(s) to cut utility bills”, and the list goes on.  We exist to talk, share, and teach this stuff.

Being a Frugaler may not be normal, but we’re working on it.