Many of us have been broke.  It’s not a fun place to be.  You may feel depressed and desperate, but recognizing that you won’t always be in this position is imperative.  There are steps you can take to live a more comfortable life financially.  Until then, here’s a primer on how to survive being broke. 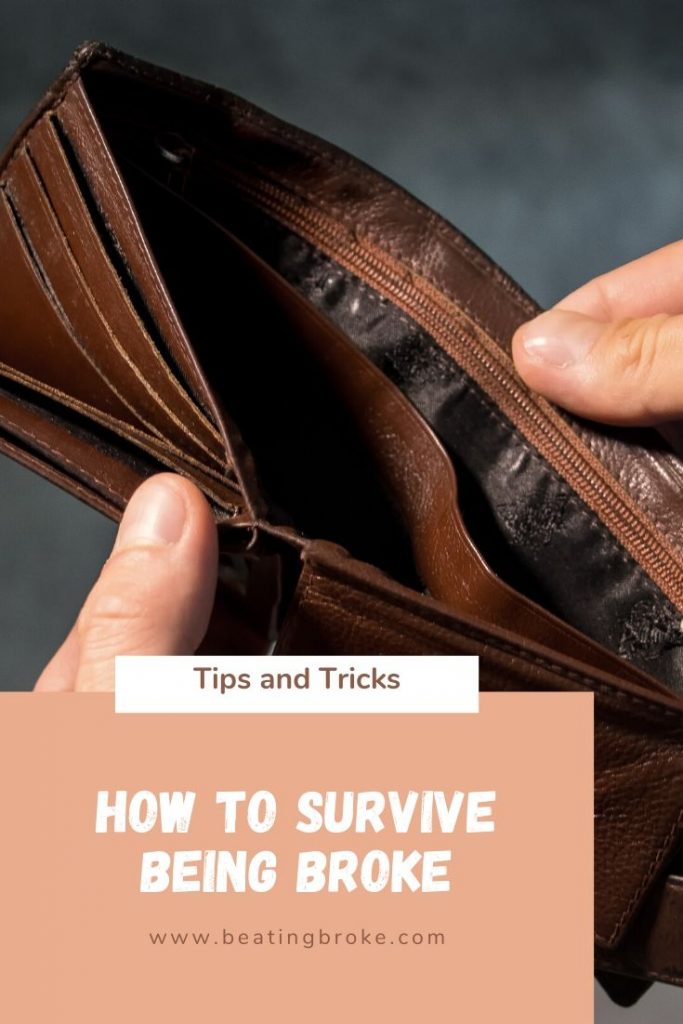 How to Survive Being Broke

If you’re broke, you must take care of your immediate needs first.

Many people who are broke become depressed.  They don’t see any way out of their situation and can’t imagine a future where they’ll be in a better position.

To successfully beat being broke, you need a positive attitude.  Research stories of people who were broke and went on to become successful and much more comfortable financially such as Erin Brockovich (played by Julia Roberts in the movie Erin Brockovich) or Chris Gardner (played by Will Smith in the movie, The Pursuit of Happyness).

Remember that life can change quickly.  You may be broke now, but you likely won’t be in the same position in five years or even two years.

The next step is to trim your expenses as much as possible.  Since food is often the largest monthly expense behind rent, that’s the best place to start.  You may love to eat salmon and steak, but now is not the time to do so.  Now is the time to eat the proverbial beans and rice.  For instance, when my mom and dad were first married and broke, my mom would buy one pork chop, pound it flat, and then split it between the two of them.  Once they had two kids, she would buy two pork chops and pound them flat to make four servings.  Now is the time to stretch your food as much as possible and buy the least expensive food you can.

What financial position are your friends in?  You’ll want to find friends who are mindful of their money and not spendthrifts.  When my husband and I were first married, we were broke.

Some of my coworkers invited us to go with them out to eat.  The other two couples were both financially comfortable, and they chose a Mexican restaurant.  To my dismay, there were no prices on the menu.  We ended up spending too much that night, even though we tried to make frugal choices.  It was just an expensive restaurant.  We couldn’t go out with my coworkers again because we couldn’t afford their lifestyle.

If you try to maintain friends who are in a better financial position than you, you may never become financially comfortable.

Just because you’re broke, you don’t have to give up your social life.  Instead, change the way that you socialize.  Instead of going to a bar or restaurant and spending a lot of money, invite friends to your home.  Have a potluck at your house or have a game night.  Once a month my parents used to have their friends over in the summer for a volleyball night.  Be creative.  You’ll find there are plenty of ways to socialize without spending a lot of money.

Find a Hobby That Pays

Sometimes when people are broke, they have a lot of time, but not much money.  If that’s your circumstance, find a hobby that pays.  For instance, my uncle started a small side business for athletes at his former high school.  He would comb through micro fiche to find all of the articles for a particular year about the high school football team.  He’d print these out and bind them all together and sell them to the athletes.  He made some money on the side, and the former athletes had a scrap book of all the old newspaper clippings from their glory days.

Other ideas might include gardening, crafting and selling the product on Etsy, doing genealogy research for someone, building web sites for others, etc.  You’re only limited by your imagination in what you can do.

When you’re broke, you may immediately think just of the short-term, but you must also think of the long-term.  How will you get out of this situation so you’re not broke your entire life?

There are several important steps you should take.

If a degree would help you secure a better job, than look into taking college classes.  When you’re already broke, you may feel like you have you have no time or money to do so.  However, if you don’t take steps to improve your situation, you’ll remain broke for much of your life.

I had a friend, Becca, who was raising her niece and nephew.  Money was tight, but she prioritized her education.  She took one or two classes a semester, putting in much of her study time early in the morning or at night when the kids were asleep.  It took her many years to get her degree, but she did.  Now, she lives a comfortable, middle class life and has a professional job.

If you don’t already have a solid background on personal finance, now is the time to learn.  This doesn’t have to cost any money.  You can borrow books from the library, take free finance classes online, and read blogs.  Learn all you can about managing money.  I’m not just talking about ways to save money, but ways to build your emergency fund and invest so you don’t end up broke again once you get out of your current situation.

How to survive being broke is a challenge for many people.  However, the first step is a mental one.  Realize that you’re currently broke, but you won’t be broke for the rest of your life.  You can make both short-term and long-term changes to improve your life and vastly improve your financial situation.  Many, many other people have done so.  Learn about those people and take concrete action to improve your current situation.

If you’re like me, the last few years, you may have felt that you’re simply treading water when it comes to income and expenses.  It seems every time our income goes up, our expenses go up, and I’m not talking about lifestyle inflation but rather insurance premiums and deductibles, etc.

Like many people, I try to cut corners to make our money stretch as far as I can.  I’ve certainly had times a few years ago when I bought the cheapest groceries that I could find by using coupons and sales, even though the food was processed and not that good for my body.

I rationalized that I was being frugal, and, I’ll admit it, I was proud of myself.  Never mind that we were eating casseroles that we didn’t really like made with processed foods or that the leftovers often went to waste because we didn’t want to eat the meal again.  Never mind that both my husband and I had cholesterol well over 200 even though we were in our thirties.

However, over the last few years, my opinions on grocery shopping, the foods we eat, and how to save money have changed. I still like to save money (and I still need to in order to make our budget stretch), but now I do it differently, and I feed my family differently.  A few years ago, I went Paleo.  I dropped a lot of weight, and my cholesterol level settled around 155, even though I was a few years older. True, our grocery budget went up, but not by as much as I expected.  I learned ways to buy healthy food at a reasonable price.

Where Else Can You Cut Besides Groceries?

Sometimes, especially when money is tight, groceries seem like an easy place to cut.  Convenience foods bought with coupons can be had for a steal.  Take a look around Pinterest, and you’ll find many posts of bloggers touting how little they spend for groceries.

But is this a good thing?  I know groceries are typically one of the largest monthly expenses for a family, but should this automatically be the place we look first to reduce our budget?  After all, there is great truth in the adage, “Pay your farmer now, or pay the doctor later.  In fact, “Americans spend nearly 20% of their income on healthcare costs, while on average spending 10% of their income on food. . .Considering the age-old adage, ‘an ounce of prevention is worth a pound of cure’ may be the first step to attempt to reduce healthcare spending—and the key place to start is food consumption.  If you start to consider your diet a form of preventative health care, you might start rethinking your daily meals” (University of New Hampshire).

Take a look at your budget.  If you don’t automatically slash your grocery budget, where else can you cut expenses?

If you don’t short change your body healthy foods, you’ll save thousands on health care later on.  Meanwhile, why not consider dropping your smartphone and getting a “dumb” phone?  (Yes, I still have a flip phone for emergencies that we bought 10 years ago.)  Can you drive your current vehicle a little longer so you don’t need to have a new car loan?  Can you drop cable?  Do you have subscriptions you’re paying for but you don’t use?  Likely, there are several lifestyle choices you can make to cut your expenses without compromising the quality of food you can buy and eat.

Do you cut other expenses so you can continue to buy quality foods, or do you prefer to slash your grocery budget?